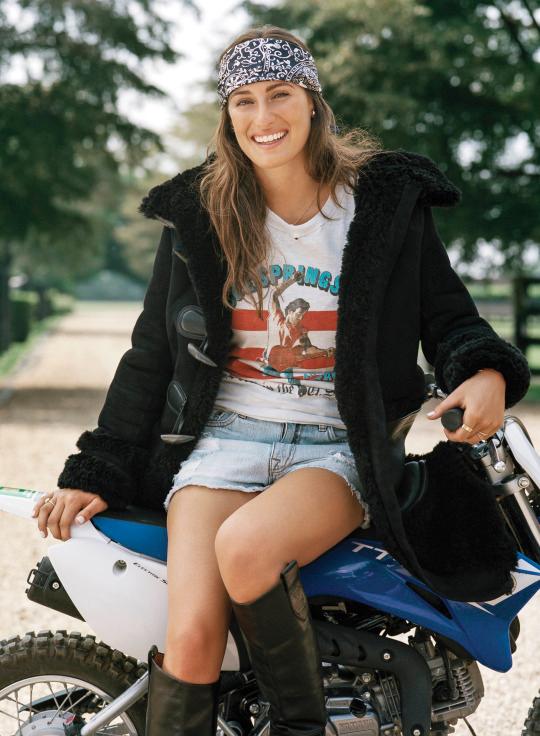 When your father is a legendary rockstar it might be easy to ride his coattails or become a professional party girl, but that’s not the path that professional equestrian Jessica Springsteen took. Bruce Springsteen’s motivated 23-year-old daughter avoids the spotlight and is actually unfazed by her mega-famous parents. She recently told Teen Vogue that she and her brothers toured with her dad as kids, but slept through half the shows. “When I was in college, he was playing right by my school, so I brought my friends,” she said. “They had so much fun, it made me get into it. That was the first time I’d watched a whole show!”

In a rare interview in V Magazine’s Issue 96, shared exclusively with Yahoo Beauty, Jessica reveals she graduated from Duke and has an accomplished equestrian career as a professional show jumper. A horseback rider since she was four years old, she won first place at the Winter Equestrian Festival this year and she’s an equestrian ambassador for Gucci. As an alternate in the 2012 Summer Olympics, she has her eye on a spot on the American team at the Rio Olympics next year.

Horacio Silva of V Magazine sat down with the middle child and only daughter of singer/musicians Bruce Springsteen and Patti Scialfa to get the scoop on her riding abilities, her famous roots, and how she takes it all in stride. Here are our favorite moments from the interview:

On why nepotism didn’t affect her life as a normal New Jersey teen:
“One of my friends in high school used to say, ‘Oh, it would be so much more fun if you were a huge brat!’ But I’m pretty boring.”

On her equestrian career:
Springsteen caught the bug after watching her mom ride. “There’s an incredible amount of communication, balance, and precision involved. It took me 18 years of training to get to this level. You have to keep plugging away and getting stronger and better. And it’s like any sport—you’re not going to win all the time.”

On being a Gucci equestrian ambassador along with Monaco royal Charlotte Casiraghi and Edwina Alexander — perhaps the best female jumper in the world:
“I remember going to Europe for the first time for a competition four or five years ago and seeing Charlotte and Edwina wearing Gucci and just thinking, ‘Oh my God, they look so amazing.’ I really looked up to them as riders as well. They’re amazing riders and they’re both such amazing people—so sweet and kind.”

On the life lessons she’s learned while riding:
“You learn discipline and how to be committed to something at a young age because they’re such special animals and they deserve to be treated the right way. You can’t just blow it off after school like, ‘Oh, I don’t feel like going today.’ They need you, and it really teaches you at a young age to be committed to something. And I think it gave me a lot of confidence by training really hard and having positive results. I mean, there’s no better feeling than seeing your hard work pay off.”

The Globe Trotter – leisurely ride through the English countryside

Body Image, the Show Ring & Why Something Has to Change